9 years ago, on April 20, 2010, one of the most catastrophic oil spills occurred in the Gulf of Mexico killing 11 people. An estimate of 210 million gallons of oil was spilled contaminating more than 1,300 miles of shoreline affecting beaches, wetlands, various ecosystems and the livelihood of people. Investigations concluded that the BP oil giant, as well as contractors, had used inadequate materials as well as a faulty safety system. In 2012, BP was found guilty of manslaughter, misdemeanor, and a lying felony charge. Countless species were affected including birds, fish, crustaceans, turtles among others. Because of such a devastating disaster, the Obama administration limited offshore drilling; however, the Trump administration has proposed to open almost all US coasts for oil drilling.  What people don’t seem to realize is that oil spills continue to happen and that oil drilling is still a dangerous and dirty practice. Moreover, Trump has signed an executive order favoring companies to build oil and gas developments and revoking an order that bans oil and gas drilling in the Arctic. Accountability is still lacking in the oil industry and more needs to be done to protect endangered species as well as our oceans. We cannot allow irresponsible politicians and corporations to keep ruining our planet.

To remind everyone about the painful past Huong is now displaying her BP oil spill mural in hopes that people can choose to love the environment and protect it and in hopes that the young generation can become activists to protect nature.

Huong BP oil spill mural was made in 2010, right after the catastrophic oil spill. It features poignant reminders of the greed of people that chose and still choose money over our environment. A 100 foot long by 8-foot tall Mural, a collection of 120 paintings about the current BP oil spill by artist Huong was unveiled in Washington DC at Walter E. Washington Convention Center during the 2010 Annual Conference of the American Library Association. Displayed for 3 days only and exclusively viewed by 25,000 librarians and attendants who visited the Capitol this year. 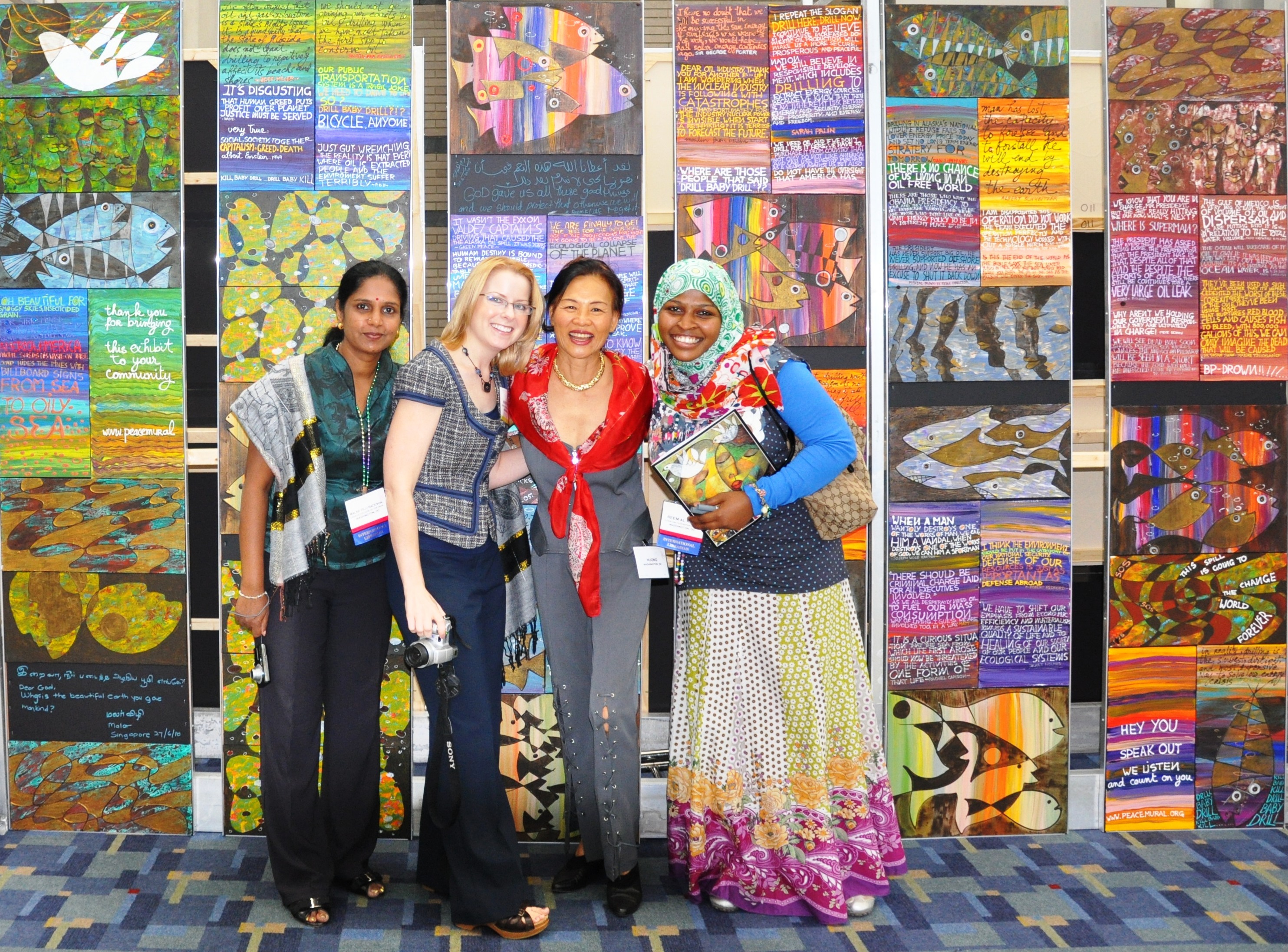 “ Huong is the first artist to respond to this catastrophic oil spill crisis in a big wave I’ve seen, it is so powerful !” said Julie Williams from San Jose.

Standing in front of the Mural, Erin B of the American Library Association in DC

expressed her emotions: “I feel paralyzed by this mural too big for me to comprehend”.

The mural is a real testimony for the people affected by the oil spill, the damaged wildlife, protests from the victims and local government, it’s also a historical memo.

It refreshes the viewers with facts leading to the nation’s oil drilling policy today, displaying the quotes from past presidents like George W. Bush in 2008, when he lifted the order that banned oil and natural gas drilling, to the “drill, baby drill ’’ slogan by Vice Presidential Candidate Sarah Palin, demanding open drilling off-shore and in the Alaska national wildlife refuge, to President Obama’s current order to shut it back down.

The artist Huong was available on-site to give the Workshop: MESSAGE TO THE PRESIDENT, which invited the viewers to write their own thought to Obama about What is going on in the nation and the world? she is a remarkable woman and has such an amazing outlook, her goal is to inform and inspire the public through art and empower the people to share their thoughts, feelings and express themselves on canvas, no matter their point of view. She is very open-minded, she will say:-“You don’t have to like the President”, said Barbara Miller, Program Manager at Broward Main Library, Florida.

One of the workshop participants, Darryl Malek Wiley of Sierra Club added his words on the BP oil spill mural –“Oil and water don’t mix, our Gulf and communities are being destroyed, we need real leadership to move to a clean energy future”.

8-foot-tall mural, a collective of 360 originals paintings.  -“It will be a gigantic book for public viewing and reading about the century’s worst oil spill disaster in the Gulf of summer 2010 for many generations to come, I hope to interview many participants, listen to different voices of America and I’m looking forward to meeting you on my road for this endeavor” Huong said and continues to say to the public.